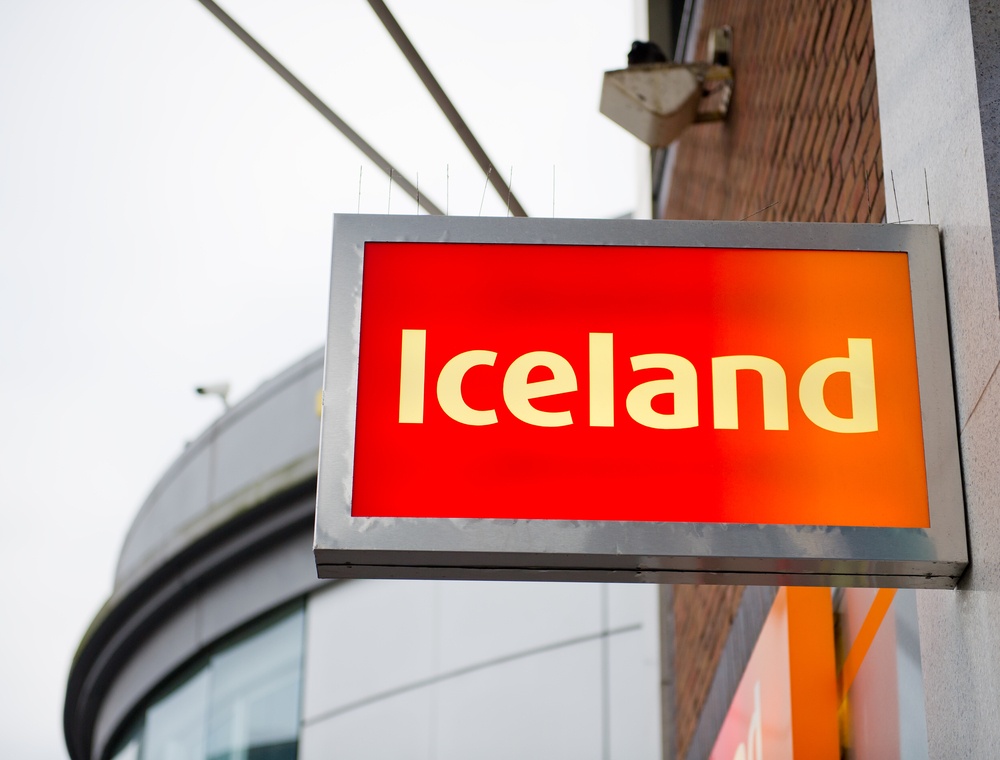 24 Mar The History of Iceland - Freezing Prices for 47 Years

Posted at 01:36 in Customer experience by Team S4RB

Here we are again. So far in this series we have wandered though the past of five UK retailers. Co-op, Sainsbury's, Morrison's, Tesco and Asda.

This time we are diving into the past of the UK's largest freezer specialist, Iceland

Malcolm Walker and his business partner Peter Hinchcliffe opened the first Iceland store in Oswestry, Shropshire with a starting capital of £60 - enough to pay the rent on the shop for one month.

Both Malcolm and Peter worked at Woolworths at the time and set up Iceland on the side. In February 1971 Woolworths fired them both after the company had realised the pair had opened a store. This allowed both founders to focus their efforts on growing the new store and by 1975 they had opened 15 new stores across North Wales and the North West.

By 1979 Iceland had started to move away from selling loose frozen food and had opened its first freezer centre in Stretford. Iceland also started to develop its own private label products and opened a new cold store and head office in Deeside.

The 80s was a massive time of growth for Iceland. With a mixture of new store openings and acquisitions of other chains, by 1984 Iceland had a total of 81 stores. In the same year, Iceland was floated on the London Stock Exchange. The flotation was 113 times over-subscribed totalling £900 million.

Iceland took its private brand very seriously and made a bold move in 1986 by removing all artificial colouring, flavours and preservatives from its food. This move was ahead of its time with most other retailers taking a further two decades to follow.

At the end of the 80s Iceland made its boldest move yet by acquiring its much larger rival, Bejam. Iceland took control of Bejam in 1989 creating a nationwide chain of 465 stores. 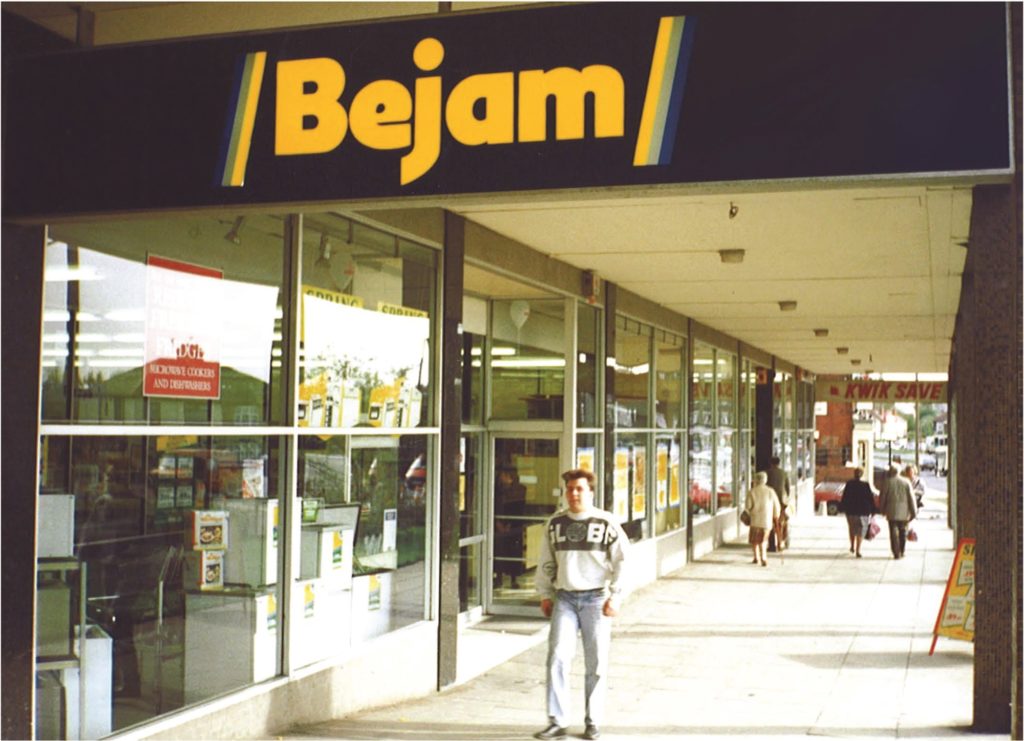 Iceland banned mechanically recovered meat (MRM) from all its own private label products in 1990.

Over the 90s, Iceland conditioned its growth and by 1996 had 752 stores and 25 years of profit growth. Competition was intense in the supermarket sector and for the first time, supermarkets started to open on Sundays as well as staying open later and later. Under this pressure, Iceland continued to innovate and introduced the unique 'free home delivery' from its stores. Iceland also expanded its private label brand with a wide range of new products.

Iceland's private brand continued to innovate with the development of a GM-free range of foods under the new brand "Food You Can Trust".

Booker became part of the Iceland group in 2000, allowing them to be able to use its buying power to cut costs. 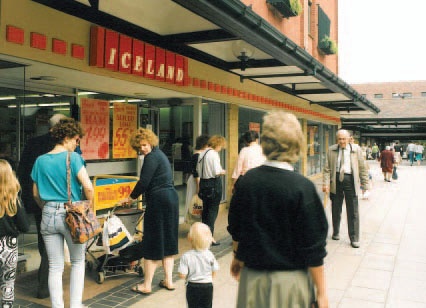 Iceland store in the 90s

After the merger with Booker, Stuart Rose took the role of CEO of the new company in May 2000 but this was short lived as he left for the Acradia Group in November 2000 and was replaced by Bill Grimsey in January 2001.

Not long after the appointment of Bill Grimsey, Malcolm Walker stepped down from the company he founded.

Iceland's group company was renamed in 2002 to reflect the merger with Bookers. The company was now called The Big Food Group. The company started to refocus its business to the convenience sector, making Londis a target for a takeover bid.

By 2003 the outlook for the new group was starting to decline and the management started a plan to turn the business around. In 2005 the shareholders of the group accepted an offer from a consortium of investors which made Iceland a private company once again. The Big Food Group was broken up, with Malcolm Walker now at the helm of Iceland Supermarket.

In 2005 the legendary "Mums go to Iceland" adverts apeared on our screens staring Kerry Katona.

By 2006, sales had started to recover and customers were returning to Iceland. In March 2006 sales had increased by 20%, making Iceland the fastest growing food retailer in the UK. This improvement helped Iceland invest in its older stores.

A staff survey detailed the recovery the company had made in morale. In recognition of the hard work of store managers, Iceland took all 600 store managers to Disney Land Paris for two days!

Iceland then went on to announce the purchase of 51 Woolworths stores in 2009, bringing the total store openings to over 70 in just a few years.

In March of 2010 Iceland featured in the Sunday Times Top 25 best companies to work for list. This was the first time the company had featured in the list and at the time was the only food retailer in the top 25. Iceland was recognised for its competitive salary and benefits

By June of 2010 Iceland had opened a total of 74 new stores within a year and also reported a sales increase of 4.3%. Iceland was also named Discount Retailer of the Year in September 2010. 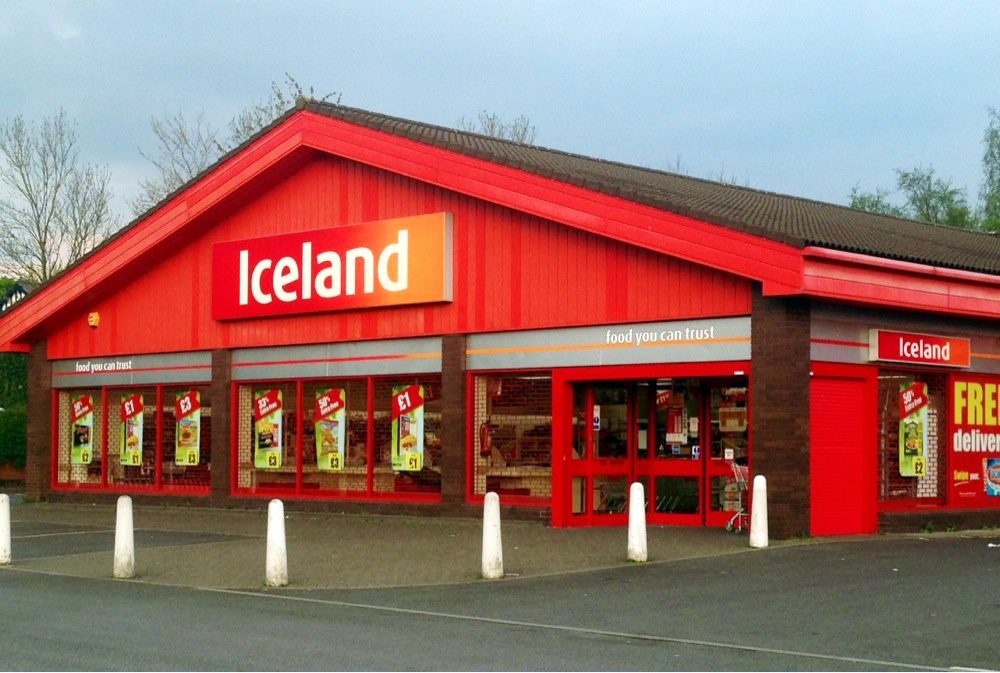 2010 was also the 40th anniversary of the opening of the first Iceland shop. The company celebrated with a charity ball that raised over £750,000 for Help for Heroes. Over the next two years Iceland continued to grow.

2012 started with a bang for Iceland by winning the coveted Best Big Company to Work for in the UK. Malcolm Walker was also named the 'Best Lead' of a big company in the UK - this award was based on votes from its own staff.

In March, Malcolm Walker completed a £1.45 billion buy back of the 77% of the company that was owned by Icelandic banks. Iceland also started a major push innovating in frozen private brand by launching 240 new products in 2012.

Iceland then acquired Loxton Foods to setup its own manufacturing company to help drive innovation and integration, the new company was renamed Iceland Manufacturing Limited.

By 2013 iceland had begun testing an online shopping service to add to its 'free home delivery' service from stores. In September 2013 Iceland opened its 800th store and continued with its private brand innovation by launching a premium ready meal range. 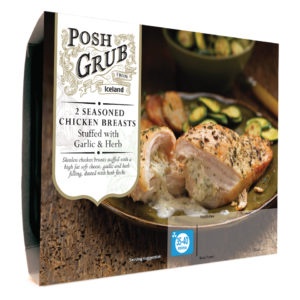 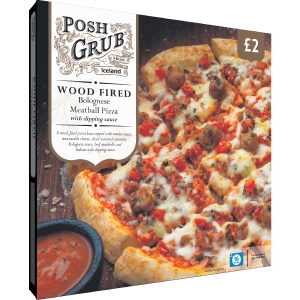 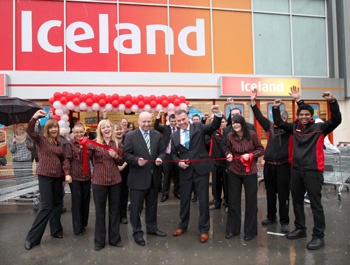 Iceland was awarded 'The Best Big Company To Work' for the 2nd time in 2014 and also picked up a number of awards at the 'British Frozen Food Awards'.

August of 2014 was a busy month for the retailer, it not only opened a new store concept called 'The Food Warehouse', it also completed its national roll-out of the online shopping service with free delivery. 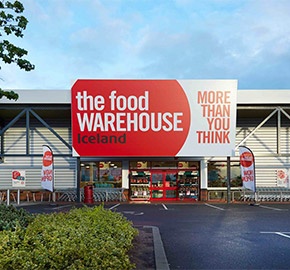 A The Food Warehouse store

The Food Warehouse was a new concept that was double the size of a normal Iceland store and stocked a number of new ranges including non grocery products.

Iceland kicked off 2015 with the launch of the exclusive Slimming World ready meals based on the popular at the time weight loss meetings.

In May Iceland annouced The Power of Frozen. 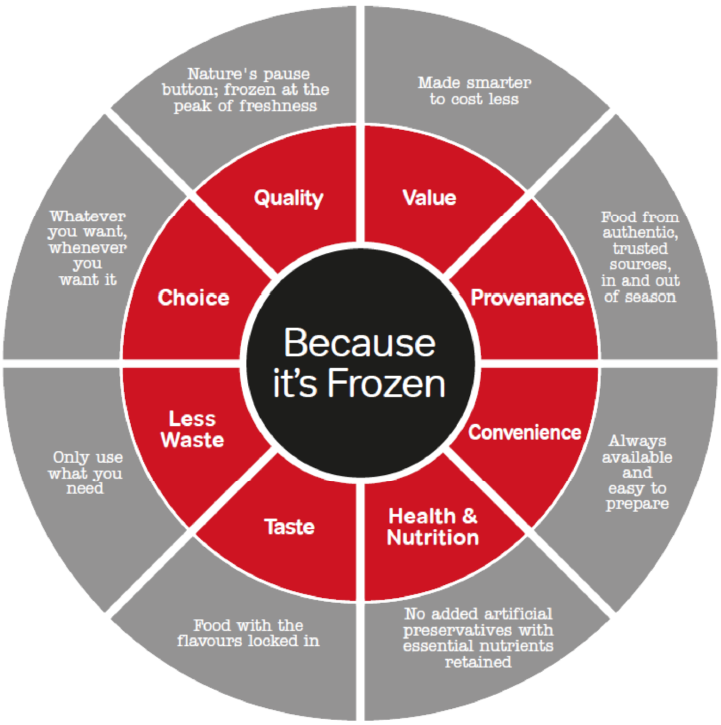 The campaign was designed to advertise the benefits of frozen food. Freezing food as soon as it's picked locks in the freshness and guarantees nutrients and quality. Frozen food also offers Iceland customers great value for money and helps reduce waste. The campaign saw the launch of a number of superfood private brand products including cous cous, spinach and soups. The campaign then won the award for the best marketing campaign at the annual 'PAPA Awards'.

Furthermore, in 2015 Iceland was named 'The cheapest one-stop shop for Christmas essentials' by Good Housekeeping. This was due to the amazing value of the products on offer. The awards didn't stop there - Iceland continued to pick up awards during 2016 including 3 'Gold BFFF' Awards.

Iceland also invested £2 million in a new private brand development kitchen and the Food Warehouse also opened a total of 26 stores in the UK with more stores planned over the coming years.

In the October of 2015 Iceland opened the first of a new style of stores in London. This new look store introduced new freezers to showcase products and offered a number of new ranges. 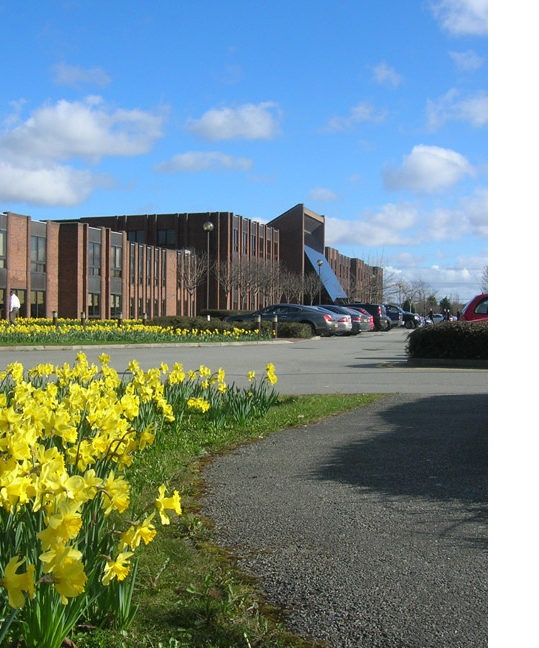