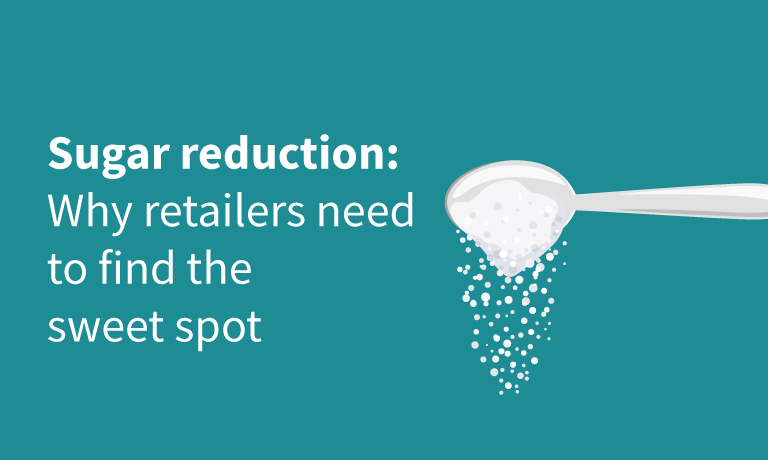 With the general election looming in June 2017, the government pushed through a new tax on sugary soft drinks. Further proposals to cut 200,000 tonnes of sugar from the UK market remained in the balance until after the election – but as all the major parties supported a sugar tax, S4RB recommended at the time that supermarkets and other retailers should start preparing.

A lot has changed since chancellor Philip Hammond’s budget announcement on 8th March 2017 when he announced hefty tax hikes on sugary soft drinks. News of a snap general election led some to wonder if the plans could be derailed, however Parliament pushed them through and the tax will come into force from April 2018.

As childhood obesity continues to rise, it is hoped an increase of up to 24p per 100ml will discourage people from buying sugary drinks, while also raising funds for sports development in schools.

Public Health England’s proposals do not stop there either. As part of ambitious new targets, it wants to see sugar reduced by 20 per cent across nine key food categories, including cakes, puddings, cereals, yoghurts and sauces, by 2020.

Product development and changes to packaging and labelling takes months to implement, so retailers and manufacturers should already be looking at where they can make changes.

Under the current proposals, manufacturers are faced with either overhauling ingredients or else making their products smaller. Despite the health concerns, reduced sizes inevitably attracts bad publicity from a consumer affairs point of view – and stories about smaller, but more expensive products are never far from the headlines. If retailers benchmark their products against others, they could well lose out to rivals who manage to retain the original sizing.

Instead, it’s highly likely that manufacturers will look for sugar alternatives, including artificial sweeteners like aspartame or natural ones like honey, albeit at potentially lower levels than sugar, to still give an overall reduction. However, substitutes are rarely straightforward and they will need to strike a balance between compliance, cost of ingredients, taste and public opinion.

You may have seen, in a recent BBC news article, that Coca Cola has no plans to change the recipe of its Classic Coke. Instead, in order to mitigate the consumer impact of the sugar tax, Coca Cola has decided to reduce the size of a ‘large’ bottle of Coke, from 1.75l, to 1.5l, and increase the price. It’s worth noting that Coke already retails a multi-pack of 1.5l Coke, so this isn’t actually a massive change for the company to implement, but it does mean that consumers will, price-wise at least, be worse off than they currently are. Whether this will have a massive impact on sales remains to be seen.

In the same article, AG Barr has recently reformulated Irn Bru, to reduce sugar and replace with artificial sweeteners, in order to avoid the new tax. This has sparked a reaction from some fans, and is a brave move to make. By AG Barr’s own proclamation, Irn Bru is their biggest brand, and whilst the impact is yet to be seen, it’s worth noting that when Coke previously changed the recipe for Coke Classic, it swiftly changed it back. More recently, Coke Life (which also contained sugar and a sugar replacement), did not live up to sales expectations, and the product left the UK market completely in 2017.

One option that AG Barr could have adopted is to simply reduce sugar over time so that customers gradually become accustomed to the taste. Many national and private brands have already done this and in fact, it has created a valuable marketing opportunity when targeting health-conscious customers.

At the same time, we all know that sugar plays a functional role in many processed foods. As well as being the main ingredient in confectionary, for instance in caramel, it is also used to enhance taste in ready-meals and sauces. Furthermore, it is an effective preservative and adds texture to products like ice-cream and jam.

For supermarkets and other retailers working with multiple suppliers, the challenge lies in ensuring all lines are compliant. Changes could be made ‘under the radar’ as part of their ongoing product development or become part of a more public healthy eating marketing campaign. They may tackle one category at a time, for example baked goods, before moving onto the next.

The government set a five per cent reduction for the first year and there is every chance retailers will stick to this rather than cutting any more, as there is a chance that consumers will notice taste difference and may quickly move to other categories. By staggering reductions over three years, manufacturers do not have to rush changes through, and this gives the chance for consumers’ palates to become accustomed to the reductions, over a period of time.

While there is an argument that consumers have a responsibility to monitor their own sugar intake, retailers need to ensure they can make informed choices through effective labeling and transparent product information. In-store point of sale, for example, is a good way to let people know about the changes, while marketing certain lines.

The good news is that the UK grocery sector is in a strong position to meet the existing government targets and no doubt any other changes that follow. Over the past decade we have seen salt levels drop and the widespread removal of hydrogenated fats and other additives, driven by a combination of public health campaigns and consumer opinion.

It will be interesting to see what happens after Brexit when the UK leaves the EU and is no longer subject to its directives on nutrition and ingredients. However, our retailers already lead the way on best practice so it is likely to be ‘business as usual’ for the foreseeable future.

I discussed the topic of sugar in a recent podcast, so be sure to check that out on the sugar podcast.