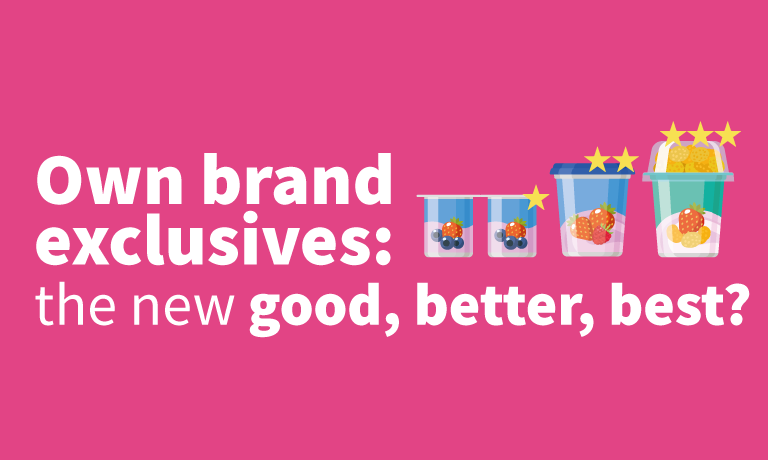 Posted at 10:38 in Product development, Food trends by Team S4RB

You may have seen, in recent news, that Tesco has ended its ‘Brand Guarantee’ scheme. Essentially, the scheme was a means of customers being able to claim back for branded products, where the price they paid was higher than in Asda, Morrisons, or Sainsbury’s. The scheme ended on 16th July, with Tesco promising to focus on every day low prices for customers.

The change to Tesco simplifying its pricing structure does echo the changes that Sainsbury’s made in 2016, where they removed the multi-buys and confusing deals, and introduced simpler pricing for customers, which was intended to give customers better value, an easier shopping experience, and end disingenuous pricing practises.

In parallel to the recent news about the brand guarantee, Tesco also announced a renewal in its own brand products, promising more ‘exclusive’ own brands to replace a number of its well-established own brand products.  As a result, Tesco has now renewed around 30% of its affected own brand products in recent months. Introducing ‘brands’ isn’t new to Tesco. In the late 2000s, Tesco introduced a diverse range of tertiary branded products, intended to compete with the discounters. The additional range of tertiary discounter brands became confusing for customers, especially as the products were competing with Tesco’s own Everyday Value range on price, and against its own core range of products on quality. Apparently, a winner for customers (if they could navigate the different tiers), but surely, for Tesco, only encouraged customers to trade into products with a lower margin. The range didn’t last for long, and Tesco reverted to the more conventional and widely-recognised ‘good, better, best’ brand hierarchy.

Given the history of a prior failed attempt, Tesco’s recent move to expand its range of exclusive own brand products might seem surprising. It appears to be, once again, aimed squarely at the discounters. Tesco will likely have seen a positive impact from introducing its ‘farm’ brands into its fresh produce categories, and will be expecting to see the same impact across its range of own brand products. This is a major departure from ways in which UK supermarkets have traditionally structured their ranges. Good, better, best range tiering is well-established across the entire food industry, and will be easily-understood by customers. On the flipside, you could also argue that customers have continued to react well to the less traditional brand structure that Aldi and Lidl operates (with their first UK stores opening in 1990, and 1994, respectively).

Time will tell if Tesco has judged the timing of this brand change correctly, whether the changes are intended to directly compete with some national brands too, and whether other supermarkets will follow suit. I think it’s safe to say that all of the big four are frantically trying to find ways to successfully compete with Aldi and Lidl, without dramatically eroding margins and profit. What the latest Tesco move will do is inject a bit of interest and variety into a traditional range structure that customers may have become indifferent to, and it’ll likely encourage some wavering shoppers to remain loyal to Tesco.