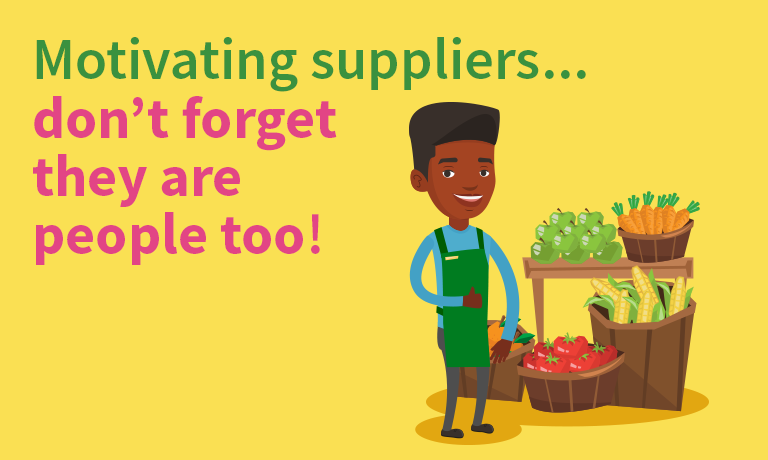 12 Apr Motivating suppliers – don’t forget they are people too!

Posted at 11:46 in Supplier development by Team S4RB

I’ve always been the technical, logical type.  Words like ‘engagement’ had never been particularly high on my agenda.  People should do what you ask them to if there’s a business or personal relationship that defines they should - simple.  Then a couple of years ago I started working for S4RB.  All of a sudden I’m surrounded by ‘engagement consultants’ and people doing ‘supplier engagement’ - neither of which initially actually meant anything to me whatsoever.

So fast forward to today, since those early days I’ve run many a supplier-focused change project, impact assessment or data collection campaign, a couple of large system implementations working with retailers and suppliers and even spoken to actual suppliers about what works and doesn’t work for them.  You know what I’ve learned?  Well, astonishingly, suppliers are a lot like the rest of us; they do the things that matter to them first and prioritise activities that they want to do and see a point in.

Beyond your Maslow and Hertzberg ‘management science’ malarkey, there’s a whole subset of behaviour that us humans are guilty of, first and foremost being that we don’t always prioritise the most important tasks, but the ones that we actually care about.  For example, in my case if the sun is out and the washing needs doing, I’m going out on my motorbike – no contest whatsoever!  I’ll worry about the washing later.

This is where we loop back round to the whole ‘supplier engagement’ thing; ultimately if we want to work with suppliers as one team and leverage their capabilities to our advantage we have to make sure they care enough about doing so to actually help us.  Clearly, we’ll never make data collection or complaints analysis as much fun as tearing up a B-road or sitting in a beer garden, but there are things we can do to encourage and support suppliers to prioritise us in their workload.  These factors typically sit in one of two camps:  Motivation and understanding; I’ll focus on motivation here.

Now, picture the scene:  A donkey is carrying a load, intermittently being hit with a stick when its pace drops below a given speed; clearly the donkey will walk just quickly enough to avoid being hit.  This is quite possibly your supply base right now!

Now again picture our friend the donkey carrying the same load, but being coaxed forward with our cliche-completing carrot.  Clearly old donkey is going to try to get to the carrot.  We want our figurative donkeys to be chasing our exceptionally cliched carrots!

So how do we get our suppliers to act like our friend, the donkey?  Easy, we give them a carrot.  By behaving with integrity and reciprocity towards our suppliers, rather than simply beating them with the aforementioned stick, we already elevate ourselves above many of their existing customers and as a result we get our own priorities to the top of their pile.

So how the heck do we actually achieve and act on such vague buzzwords in real life? The good news is it’s pretty straightforward: Get the communications and messaging right, be consistent, be respectful, and be transparent (and honest) in your interactions with suppliers.  It really is that simple.  It’s almost as if they’re people too…

Further reading: The carrot and the stick: What you need to know for successful Supplier Engagement.