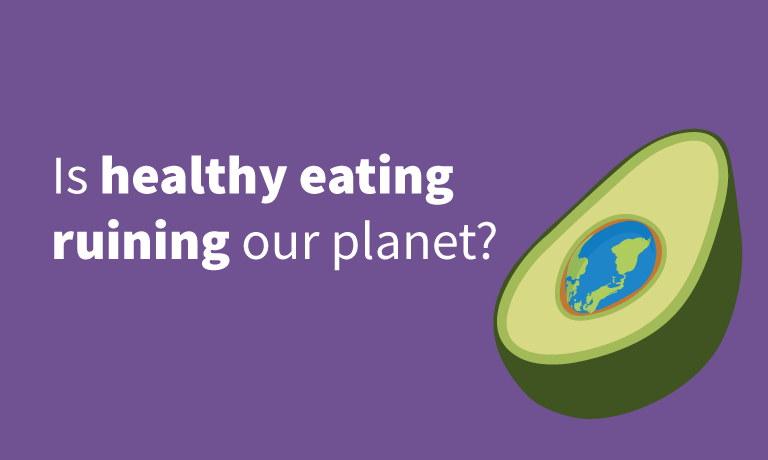 Posted at 10:00 in Sustainability, Food trends by Josie Burt

In recent years, many foods which were previously only consumed by a relatively small percentage of the Western population, have become staple items on the shopping list of an ever-growing number of healthy shoppers. And while these foods might be helping shrink our waistlines, are consumers ready to stomach the unpalatable truth about the damage these foods are doing to our environment?

Due to the unprecedented appetite for this creamy green fruit, this spike in demand is indirectly fueling illegal deforestation and environmental degradation in Mexico. The problem stems from that, theoretically, it is far more profitable for Mexican farmers to grow avocados than other traditional crops.

Most avocados that line supermarket shelves worldwide hail from Michoacán. And in this region particularly, growers are ignoring the law and thinning out mature pine forests to plant avocado trees instead. “But that’s just swapping one plant for another?!” I hear the smashed avo fans cry. And I hate to break it to you, but it’s really not.

A permanent forest won’t be regularly sprayed with fertilisers and pesticide. It has a natural eco-system that looks after itself and acts as a carbon sink. Avocado crops however, require repeated cycles of chemical inputs and need vast amounts of water; which puts pressure on local water reserves. An estimate provided by the New York Magazine states that it takes up to 272 liters just to grow half a kilogram of avocados.

And it’s not only Mexico who is being impacted. While the drought in California may have been officially declared as over in April this year, residents are still having to curb their water use and farmers are looking for long-term solutions to be able to continue growing their crops. And with 80% of water in California used by humans on farming, it’s no surprise that California’s governor, Jerry Brown is already preparing for another drought to grip the state in the future.

While most people associate soy with tofu and soy milk, in reality only a small portion of soy is consumed directly by humans. Most of the world’s soy crop ends up in feed for poultry, pork, cattle and even farmed fish, which means most soybeans are consumed indirectly by humans through meat products. And with the demand for meats steadily increasing the strain on the environment is growing exponentially.

The problem lies within the growth of the soybeans themselves; as vast expanses of land are needed to grow them. Most soybeans are grown in fragile ecosystems with almost  4 million hectares of forests being destroyed every year. Areas such as Brazilian Cerrado, the Amazon, the Chaco, and the Atlantic Forests of South America are all victims of this mass deforestation.

The obvious answer is to lower and/or cease all meat consumption. However, as soya is a staple in the vegetarian diet and if human consumption of soy replaced the demand for meat, realistically we’d be back at square one.

The dirty little secret of health freaks, cacao is the key ingredient required for any “guilt-free” treat as it’s minimally processed, but tastes reminiscent of traditional cocoa. Pure cacao contains around four times as many cocoa beans as the same weight of normal chocolate or regular drinking chocolate (which have milk and sugar added).
With this spike in demand for this tasty substitute, ever increasing pressure is being put on the already depleted cocoa-growing regions.

Production areas are seeing soil erosion and mass deforestation for new plantations. While the cocoa industry is closely scrutinized, Jason Clay, senior vice president of markets and food at the WWF, stated that, “The worst producers – the bottom 25% - only produced 10% of the world’s cocoa, but accounts for 40-50% of negative impacts such as deforestation, illegality, soil erosion, misuse of fertiziler <…>”

The good news is that there are programs, such as the Cocoa Life Program whose mission is to create a sustainable cocoa trade, all the while continuing to transform the lives of Indonesian farmers. But it seems there is a lot more work to be done worldwide, with reports that regions in Peru, the Ivory Coast and Ghana, to name a few, are all buckling under the strain to mass produce the beans and are damaging their fragile ecosystems in doing so.

These are only three of the most popular foods of 2017, but the list is never ending when it comes to newly popularized Western health foods which are damaging our planet. All follow a similar tale; a peak in demand leading to mass deforestation, illegal management of crops and just general poor farming practices which are having irreversible impacts.

With many of these foods stemming from some of the poorest corners of the globe, it’s no surprise these farmers are jumping on the chance to produce these highly sought after (and often) well paid for products. But what happens when the West grows bored of these products? Or we fall in love with the next superfood? And the land and soil so damaged from poor practices leaves nothing for future generations to meet those new demands?