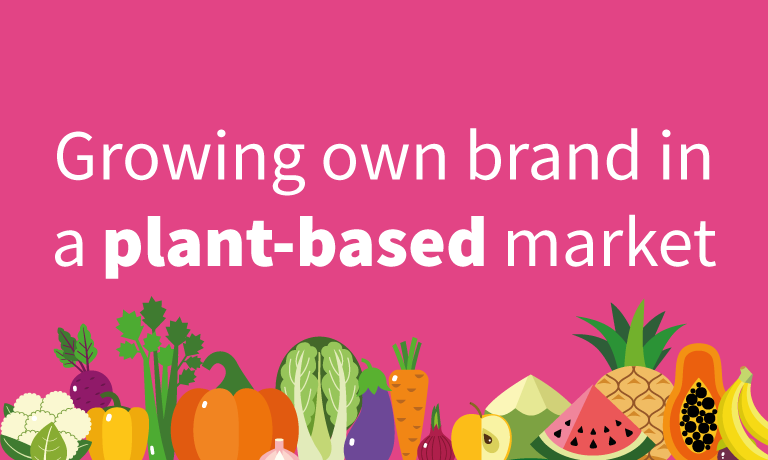 16 May Growing own brand in a plant-based market

Posted at 01:20 in Sustainability, Food trends by Team S4RB

As I begin to take a deeper dive into understanding the industry in which we operate, I have found myself drawn towards the emphasis on healthier living and sustainability, both of which have become a marketable topic for our beloved supermarkets.

I have seen an enormous effort by retailers recently to introduce plant-based meals to consumers who are looking for items that check the boxes of being an ethical, environmental friendly and healthy product. We are becoming more conscious of what we eat and why, with many individuals going as far to reduce their consumption of meat and dairy partially, or entirely.

It has clearly been noticed by our larger retailers such as the likes of Tesco offering their ‘Wicked Food’ range, Sainsbury’s with their ‘Plant-Based’ range, Waitrose’s ‘Good Health’ range and most recently Asda’s own plant-based alternatives range. In 2017, ASDA also became the first supermarket to use the official Vegan Society trademark and in December they were even the first retailer to launch a vegan mince-pie for Christmas. These ranges all aim to meet market demand by meeting the needs of consumers who want plant-based meals.

But just how many consumers are there?

Research suggests that we now have just over three million Britons following a vegan, entirely plant-based lifestyle. Further research has even been collected and through a flexitarian January one-in-ten shoppers brought a meat-free ready meal, boosting sales by 15% compared to this time last year.  The trend of veganism is hitting its stride in mainstream and social media, endorsed by influential musicians, athletes and medical experts.

As a long time consumer of plant-based alternatives it’s a relief for me to not have to make my own dairy-free milk from home - long gone are the days of making it from scratch - because now all retailers are offering their own dairy-free milks to the wider audience at an affordable price.

It really is great to see steps being taken towards catering to a growing audience both interested and invested in a plant-based diet. Yet, as a consumer I feel that is still some way to go, and further areas to capitalise in.

I feel that more can be done.

Currently, supermarkets are selling similar products, as similar prices points, to the same consumer in the plant-based market.  However, I can see gaps in this market which I am waiting for retailers to capitalise on.

For example, cakes and pastries made entirely of plant-based ingredients are largely unavailable within supermarkets. For those with a sweet tooth the option would be greatly appreciated and welcomed as plant-based alternatives to the sweeter things are not quite there yet. We have seen this happen with ice cream offerings; take Ben and Jerry’s for example, who now offer dairy free alternatives due to overwhelming demand.

In addition, we also have plant-based alternatives with a “meatier” taste and flavour that is still evolving and getting to a point where the difference is almost unrecognisable. However, retailers are offering national brand products to provide as options for this type of product, with less of a focus on private label. I do hope to see retailers investing in this plant-based innovation soon though as to have an offering like this would appeal to those who still eat meat but wish to have less of it.

The plant-based market is growing rapidly, and through this there is a wealth of opportunity waiting to be uncovered. Current investments from supermarkets are a step in the right direction as they provides more options for consumers looking to do their bit healthily, ethically, or environmentally whilst also driving change on a larger scale to a more open and sustainable way of eating. However, I see room for growth, which I am excited to see retailers capitalise on in the future.